With rising food prices and a high unemployment rate, millions of South Africans go hungry each day. Simultaneously, it has become almost impossible for new farmers to make a decent living.

There has been a downward trend for the past 30 years, where consumers continue to pay more for food but at the same time it is becoming harder for farmers to flourish, with many going out of business.

This is according to social justice activist Tracey Ledger. In response, some farmers have adopted desperate farming techniques, which harm the environment, animals and people’s health, as a survival strategy.

In her book, An Empty Plate, Ledger investigates the connections between food security and sustainable agriculture. She argues that economic and social problems in South Africa are directly linked to food and thus food should be at the centre of efforts to build a more equitable and just society.

There is enough food being produced in South Africa to feed the entire population. Why, then, are millions of South Africans, including farm labourers, going hungry each day? Because they do not have access to affordable quality food. 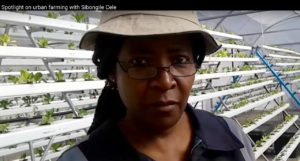 In response to this increasingly bleak situation, a new kind of farmer is emerging in urban areas, who claim rooftops to start veggie gardens. One of the pioneers is former accountant Sibongile Cele, who experimented with permaculture on her property before starting a hydroponic farm on a rooftop in Hillbrow, Johannesburg.

With a vertical tiered system to maximise space, her plants grow through holes in the piping. The roots feed directly from the nutrient-enriched water flowing through this highly efficient system, requiring no soil and less water than traditional farming. She sells her produce direct to her customers or to local vegetable sellers, which means lower prices for the consumer since she bypasses the formal retail sector with its large markups.

Her work is more of a vocation and way of life than a nine to five. Not only is she encouraging young children to start their own gardens, as part of her “Garden to Plate” initiative but she is also a key member within several networks. 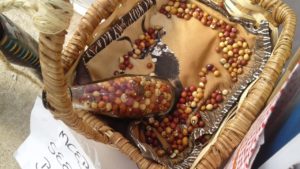 One is the GMO Free Zone with a campaign launch in celebration of World Food, in Port Elizabeth. Here is a link to an introductory video. For more information visit the African Centre for Biodiversity website and Seed Freedom.

Cele is also an active participant in the iZindaba Zokudla network where urban farmers meet to support each and share expertise. In September they met to give advice on some of the members’ business plans.

They are also sending out a call for people to organise cooperatives with the possibility of training from the German Co-operative and Raiffeisen Confederation. This is being organised through the National Professional Tertiary Cooperative of South Africa.

Cele has also started the Mcebo SeedBank initiative, as part of the movement to save and share organic, open-pollinated seeds. Through all these activities Cele is changing “the food system in South Africa by changing communities one day at a time.” Click here for more details on Cele’s rooftop farm, Mcebo Fresh Veggies.

In this video she talks about the Mcebo Seed Bank and her Farm-in-a-box. 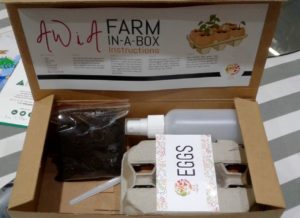 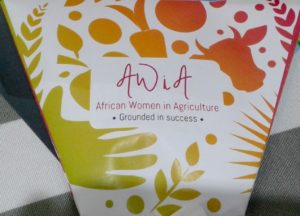