Environmental Entrepreneurs get a visit from sponsor HSBC’s staff 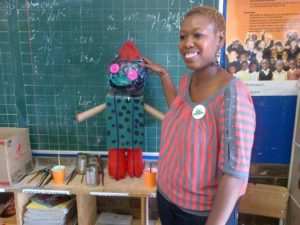 Funded by HSBC Global, the Environmental Entrepreneurs programme has been developed for implementation in schools for learners in Grades 6 and 7, ages 10 to12 years. The programme was initially piloted in Latin America and has been redesigned to suit the environmental needs of South Africa. The launch in Africa has been made possible by a further generous grant from HSBC Global for South Africa, Nigeria and Kenya.

Isabel Correia, head of marketing and company secretary for HSBC South Africa noted: “If we are successful in promoting environmental awareness and care amongst the young people who are our future leaders, we have a far greater chance of mitigating challenges to the environment and achieving higher levels of environmental sustainability.”

The learners learnt about the three Rs – Reduce, Reuse and Recycle and were divided into teams that had to develop, plan and launch their own sustainable recycling businesses. The HSBC volunteers assisted these teams in putting together their team mascots, using recycled material.