Over 800 learners from more than 13 schools across the country competed in the HP Social Innovation Relay between March and June 2012. Learners participated in a three hour workshop, where they were taught about Social Innovation. Learners then completed an online quiz and grouped themselves into teams of between three and five members. These teams were then required to develop a socially innovative business idea that would alleviate a problem affecting their communities.

40 teams submitted business ideas and the best 20 ideas were selected by a panel of JA South Africa judges. These 20 teams were required to submit a full concept paper of their idea and the best 10 concept papers were selected. The judges scored the teams on content, innovation and creativity, social impact, the global scalability of the concept and feasibility. The top 10 teams were comprised of learners from Dawnview, Sunward Park, Tlakula and Sandtonview High Schools in Gauteng as well as The Beacon Secondary School in Qwa Qwa, Free State.

Each team was required to develop their concepts into comprehensive presentations with the assistance of dedicated HP volunteer mentors, who spent many hours with their teams, ensuring they were ready to participate in the SIR national final. The finals were held at HP’s Johannesburg offices on 2nd July 2012, where the top ten teams were required to present their developed concepts to a panel of esteemed HP judges, namely Ms Gois Fouche – HPSA Transformation & Strategy Manager, Ms Sheryll Sukhoo – HPSA Education Services Country Manager, Ms Petro Plotz – HPSA Channel Account Manager, and Mr President Ntuli – HPSA Global Account Manager.

Team Emulsified Environmentalists from Sandtonview High School were judged the winning South African team. The team identified the current power shortages and constant fire breakouts in South Africa’s informal settlements, caused by the use of candles and paraffin lamps, as a serious problem facing their community. Their solution focused on creating solar powered lamps out of recycled material, thus eliminating the need for both candles and paraffin lamps. 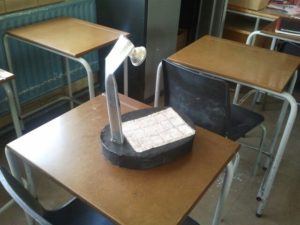 The lamps, made from recycled cardboard and foil, can be placed in the sun during the day, charging the solar cells. Additional mirrors will be placed on either side of the light bulb, reflecting the light coming off of the bulb – ensuring that entire rooms are sufficiently illuminated. It’s production and usage will save the environment from pollution caused by power stations and will also contribute greatly in the fight against global warming. Approximately ¾’s of South Africa’s matriculants (final year of school in South Africa) have no electricity and therefore, no source of light to use to complete their homework, Emulsified Environmentalists believe that their solar lamp will assist all members of the community that do not have access to electricity. The four members of Emulsified Environmentalists were each rewarded with an HP laptop for their winning concept and have progressed on to the final round of the competition.

The team will be participating in the SIR global final on 12 July 2012, competing against the top teams from across Africa and Europe. During the next week, the students, with the help of a group of HP mentors, will be required to develop a three minute video pitch explaining their concept. On 12th July 2012 the team will present their video and concept to an international panel of judges of top HP management, who will select their most feasible and innovative concept.